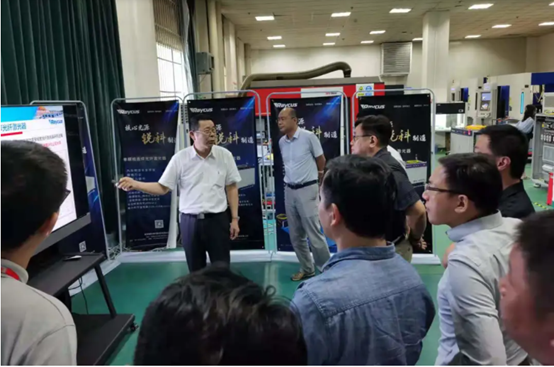 Yan Dapeng, vice chairman and chief engineer of Raycus Laser, introduced in detail the development history of Raycus Laser, the product types of fiber lasers and core technology research and development to Jiang Jiheng and his party, and put forward the independent intellectual property protection problems encountered and the efforts made in the development of the company in recent years.

Afterwards, the group visited Raycus Laser production workshop, watched demonstrations of laser cutting and laser welding, and had an in-depth understanding of the current production scale, production process and quality control of the company.

Jiang Jiheng, general manager of Foxconn’s iDPBG Business Group, fully affirmed the advanced technology and development prospects of Raycus fiber laser. He hoped to rely on the bridge role of HG Laser to reach deeper cooperation in the field of “Laser plus Intelligent Manufacturing”.

Our company’s technical director participated in this meeting and had a clearer understanding of the future development prospects of the laser cutting industry.